One of the most ingenious new products at Elmia Wood is a “peg” that is mounted on the top of young pine trees to reduce damage from hungry moose. The inventor, Johan Larsson, has used the pegs for over 10 years on his own plants with excellent results. Now tallskydd.se is being launched to forest owners on a wide scale.
“Getting confirmation from buyers that it actually works is the best thing ever,” he says.

When the infamous storm Gudrun passed over Sweden in 2005, much of Johan’s forest was blown down.

“Then I wanted to plant pine. I was told it was an impossible mission – that the moose will eat it all. ‘No they won’t,’ I thought, and planted, sprayed with all the products available and waited. Unfortunately, they were right, it was impossible – the moose ate everything.”

But shame on him who gives up.

“I tried again. Tried fencing but that also proved impossible if you want to have your land accessible.”

So Johan had to find another solution.

“I don’t give up easily. So I started trying out a mechanical solution in steel plate. The patented model that is now available is version 32 in the product development phase, so it takes time to get things right," he laughs.

Growth and wild animal feed at the same time

The Tallskydd pine protectors are put onto the young plants in August/September before the moose and deer start to eat them.
“You can put them on when you want – the weather makes no difference to the result, unlike spraying, which is weather dependent.”

You carry the protectors with you in an ingenious holder attached to your belt.

“In year two and later, you don’t need to take any tools or accessories with you – you just go out and move the protector up to the new top shoot.”

One important advantage is that the top shoot is protected while the side shoots are still accessible for grazing:

“You get good tree growth while also providing food for the moose with the side shoots. In some cases, it’s almost like getting your trees debranched and ready for harvest,” Johan laughs.

When the plant’s height has exceeded the animals’ reach, you just remove the protector and use it for your next set of plants.

“It’s recycling at its best. You can certainly leave the Tallskydd pine protectors in your will to the next generation.”

Johan has even thought about what happens if a protector is left behind in the forest:

“We’ve deliberately rejected aluminium and stainless steel in favour of ordinary steel plate. If one gets left behind in the ground, it will eventually disappear.”

Who is the customer?

Johan Larsson has developed the pine protector tallskydd.se which is now being launched on a wide scale.

You carry your pine protectors out with you into the planted area in a flat pack. Then you use your fingers to easily shape one around a top shoot. It is a flexible solution because every top shoot is different. 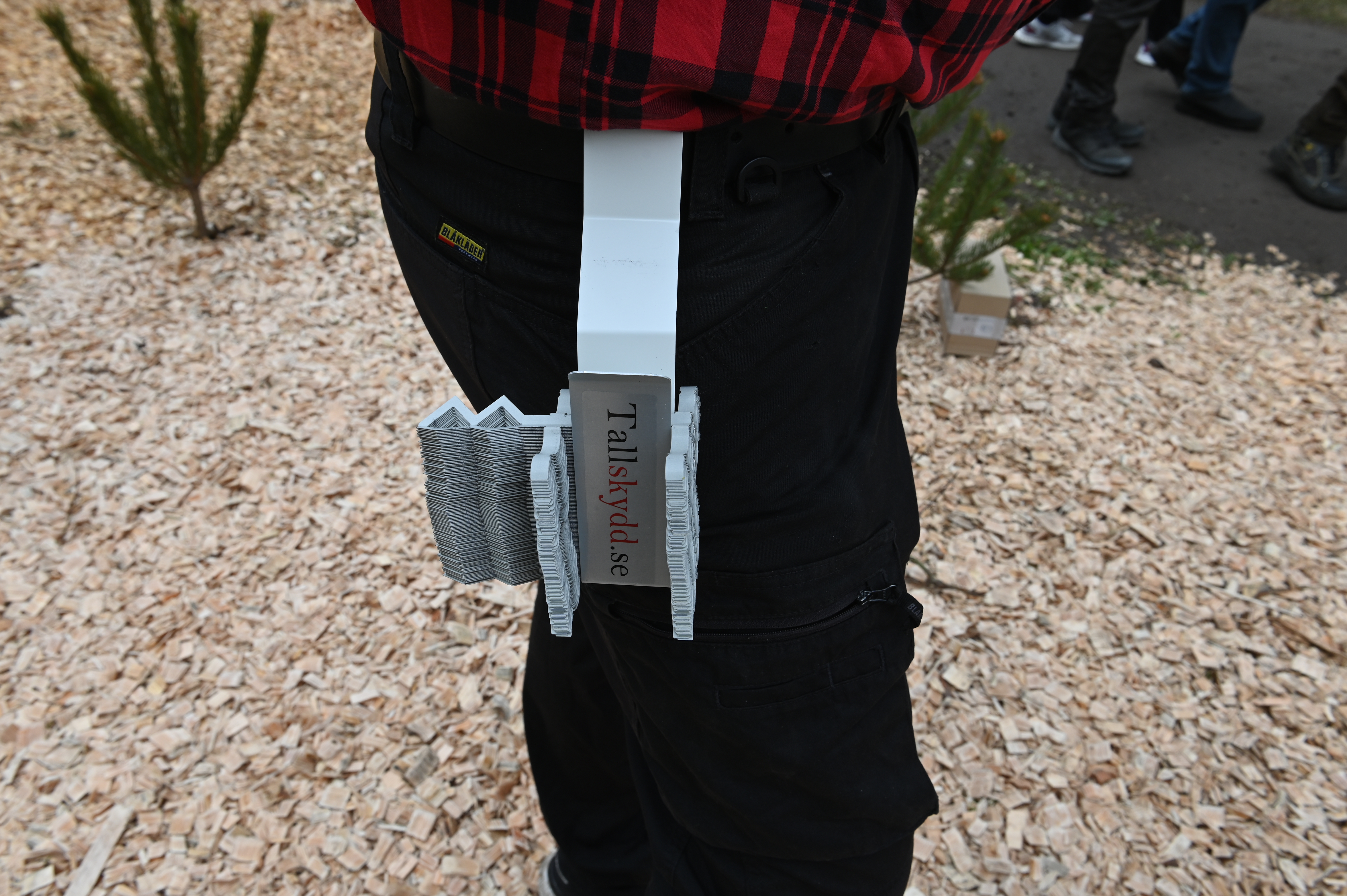